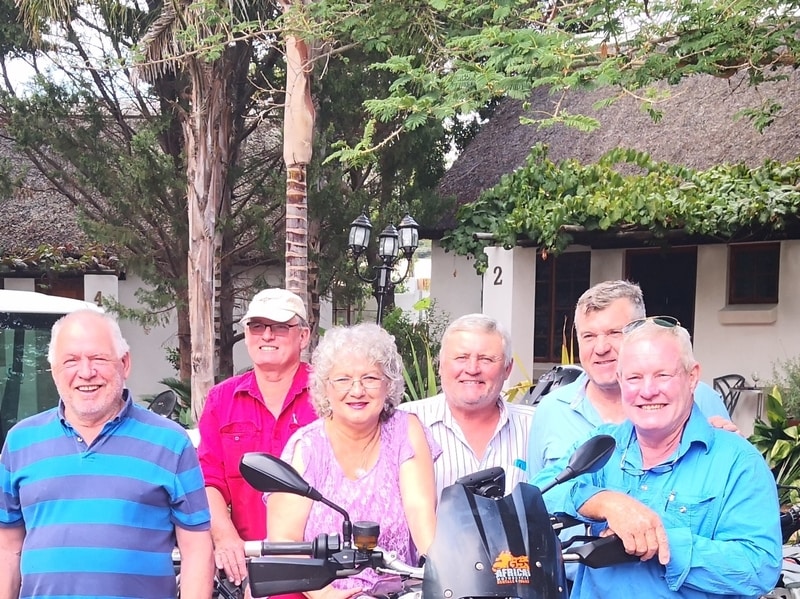 When farmers from Queensland, Australia recently checked in at #RiverLodgeVredendal we knew it was the perfect opportunity to introduce them to our famed Namaqua West Coast hospitality. Tom Beesley and his 5 friends – all farmers from Toowoomba, Brisbane, touring South Africa – decided to spend 2 days in Vredendal hoping for an opportunity to visit a local farm.

At River Lodge we try to put the heart into hospitality so we knew we had to call in some serious help – in the person of local legend Jan Ponk van Zyl, owner of Draaihoek Wildkamp. On very short notice he organised a local “tour” that the Aussies won’t forget easily. They started the day at Andries Botha’s farm, watching harvesting of grapes, on to Truter Lutz,  at Up to Date where they watched tomatoes being packed for the market and then on to lunch at Fryer’s Cove, for some serious wine-tasting. They ended the day with a hugely successful braai-a-la-West Coast at Draaihoek Wildkamp, while watching the game coming to drink water
According to Van Zyl they discussed the challenges of farming in general, but also the enormous differences between farming in SA and in Australia. Although farming generally comes with huge challenges, the farmers compared the problems they faced in Australia to farming in South Africa.
“We’ve experienced a feeling of solidarity which resulted in invitations to visit them and maybe, have our children work on their farms for a season for a different experience.”
Looking at the tired, bleary-eyed but satisfied faces of Tom, St, John Kent, Matt Harris, Jamie Grant, Brett Wilson and Matthew at the breakfast table, I knew the Aussies wouldn’t easily forget the people from Vredendal.

We use cookies to ensure that we give you the best experience on our website. If you continue to use this site we will assume that you are happy with it.OkPrivacy policy